This article explains the way I built my own Raspberry Pi Zero Cluster, having them connected in ethernet device mode to a 3B+.

Granted, this is just for playing around with distributed processing.

It is recomended to use Raspbian Lite for the raspberry pi zeros, since it's desirable to have as little overhead as possible.

Each of the zeros need to be configured in ethernet gadged mode; for that, the first thing to do is add the following configurations:

In the /boot/cmdline.txt file, just after rootwait add the following command:

Next, at the bottom of the /boot/config.txt file, add:

Finally, to be able to connect to the zero using ssh, create an empty file named ssh in the boot path /boot; the following command should do the trick:

After the files have been configured correctly, the next step is to connecto the RPi Zero to a computer and access it using ssh

When connected, a static ip address needs to be set, as well as a delay in the boot configuration (for reasons that will become clear later).

So, when connected to the zero, edit the /boot/config.txt file and add

It is very important to keep energy usage in check, since all the zeros will be connected using usb to the master, where power delivery is limited

Change the hostname in /etc/hostname

And finally, to set the static ip address, edit the /etc/dhcpcd.con file:

Repeat this for all the zeros you want to configure, remember to give them all a different hostname, ip address and boot_delay.

Now on to configure the master node, a static ip addresses is going to be assigned to each zero; also package forwarding needs to be activated to allow sharing of internet access.

First the ips, open /etc/dchpcd.conf and add the following:

Knowing which number (usb#) each zero is going to be assigned, is hard to know beforehand; to help with that the boot_delay configuration was added. That will force the order they are detected by the master node and the ip addresses will be assigned correctly.

For internet sharing, a couple of steps need to be followed:

Create a file in whatever location you see fit, /home/pi/inet-share.sh is as good as any, and add the following content:

That script has to be executed everytime the master node boots, so add it to /etc/rc.local

To connect to each zero, all that is needed is to ssh to their hostname or ip address from the master.

Next step would be to create a ssh key in master, and add it to each zero to no longer need to enter any passwords every time a connection is stablished. But that is up to you.

This is my current cluster configuration, ignore the small oled screen, thats for another project. 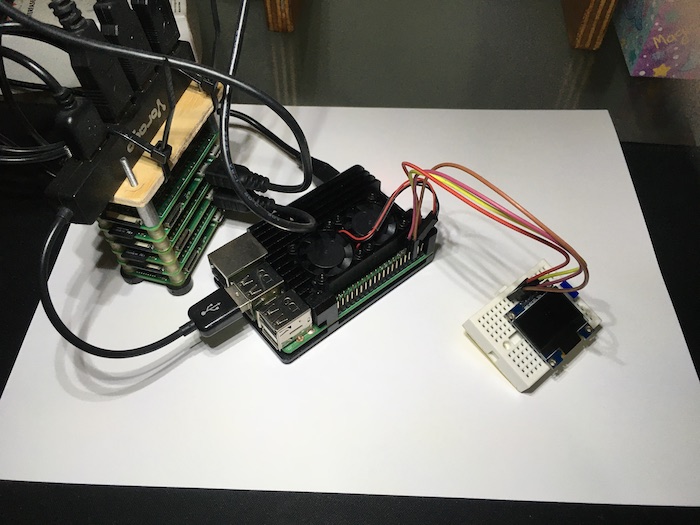